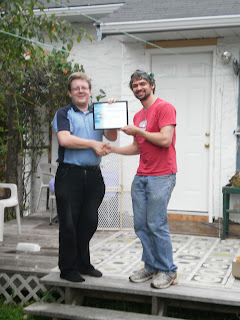 I want to share some thoughts on promoting speeches at Toastmasters clubs. Toastmasters Speeches are a bit of a passion of mine - I've been Vice President of Education (VPE) many times and when I travelled around to clubs it always was a hot topic that people were looking for advice on.

I should comment as well that I have strong feelings and opinions. I am not meaning to sound like I'm representing any particular Toastmasters club, the District in general or Toastmasters International as an organization. My thoughts are my own, OK?

One of the most important things you can do to encourage people to participate is to recognize them. Immediately. Publicly.

I remember discussing this was a VPE who organized a year-end awards meeting for those who had accomplished awards. I couldn't understand why he didn't recognize them in the meeting. I asked him, "Why do we provide verbal evaluations of speakers at the meeting immediately after completion?". He said, "Well, because it's immediate feedback, they hear what they did well, what they need improvement on... they drive home that night thinking about it."

So why wouldn't you do the same thing when they achieve their Competent Communicator (CC) or Advanced Communicator (AC) designations? Why delay it? I don't have a problem with celebrating it at end of year but have that be in addition to! Celebrate them the night of their last presentation AND at end of year.

I believe in making a big fuss about it! Bring them to the front and speak for a minute about the improvement you've seen in them. Or ask someone else to do the same. Ask them to speak about what Toastmasters has meant to them. Let them bask in the spotlight. :)

One thing we started doing at PGTM a couple years back was presenting people with nameplates from the TI Store. This served two purposes. For the first it allowed us to transition naturally into the newly branded materials. Secondly it allowed us to quickly look around the room and see how many people were achieving educational designations. It became something of a (har har) "badge of honor" to get a new nameplate.

I've seen other groups celebrate "nickel awards". This is when you recognize people for working through their first five speeches of a CC or AC. I think it's a great idea - we just haven't started doing so ourselves. Sometimes the halfway point is exactly where you need a bit of a push.

Do you remember when you achieved that last educational award? Did someone make a fuss about it? Make completing an achievement a big event - because it is!